How Can We Help You? Request a Quote Today! Click Here 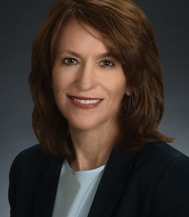 Lisa joined Southern Title in 2002 and is responsible for overseeing the company’s documentation and compliance with industry Best Practices, and managing the company's third party vendors and lender vetting requests. In addition, she serves as administrator for ResWare, the company's title processing software, and directs Southern Title’s  corporate communications efforts.  As a licensed facilitator with the Arbinger Institute, she is implementing the “Outward Mindset” training classes at Southern Title.

Originally from Royal Oak, Michigan, Lisa graduated from Appalachian State University with a degree in Communications in 1986. She started working in the broadcasting industry and following stints at radio and television stations in North Wilkesboro, NC and Columbia, SC, she moved to Florida to work in entertainment for the grand opening of the Disney-MGM Studios.

In 1992, Lisa moved into the corporate communications side, working in press and publicity for Disney Development Company and Walt Disney Imagineering. Prior to joining Southern Title, she handled copywriting and public relations efforts for Benedict Advertising.

Lisa is currently overseeing the opening of the company's newest location in Gainesville, Florida and resides in Alachua County.